In this acclaimed version by Akram Khan, the greatest Romantic ballet and its story of love, betrayal and redemption are reimagined.

As the curtain rises, dancers in shadow push against a large wall. From that moment on, Akram Khan’s Giselle stuns with powerful images and mesmerising choreography.

The “ominous, gothic” score (The Observer) by Vincenzo Lamagna is adapted from Adolphe Adam’s original, and performed by English National Ballet Philharmonic.

Sets and costumes by Academy Award-winning designer Tim Yip and atmospheric lighting design by Mark Henderson conjure up a condemned factory and the vengeful ghosts that appear in its shadows.

Since its premiere in 2016, Akram Khan’s Giselle has resonated with audiences around the world, from Manchester to Moscow. 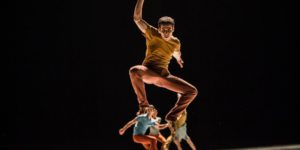