A figurehead of the Scandinavian choreographic stage, welcomed in 2017 at Chaillot on the occasion of the Nordic Festival with Scheherazade, the Norwegian Ina Christel Johannessen has created a multimedia piece with dazzling décors and intense “physicality”, a fertile artwork on survival.

Crystalline and squeaking sounds resound for this duo, entangled in front of a wall that resembles ice. Peaceful atmospheres, apocalyptic lightning bolts, primitive beats: the Earth gradually sows the seeds of hope. Come from Norway and elsewhere, 7 dancers unfold in an expressive choreographic constellation, in constant echo with the musical composition created by the Belgian electro duo Stray Dogs and the multimedia creation conceived by the Chinese video artists Feng Jiangzhou and Zhang Lin. In a tormented visual and audio décor, an obstinate community is dancing, urgently, for its survival. Preoccupied by climate change and the decline of biodiversity, Ina Christel Johannessen has carried out a research trip in the Arctic archipelago of Svalbard. Here, there is a subterranean place where the origin and the future of the world are stored in silos, where more than 900 000 seeds of food-producing cultures from the entire planet are kept. For the preservation of genetic diversity, for the survival of the human species? Frozen Songs sows the seeds of hope. 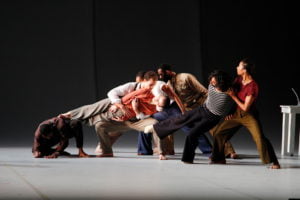