King, Haas and Hart join together to create a new piece that explores our relationship with space – physical space and infinite space. The original soundscore by the Grammy-award winning Hart, is based on his recent collaborations with Nobel Laureate George Smoot, draws on the harmonics of the cosmos itself, gathering light waves from the vibrations of heavenly bodies and converting them into layers of sound. Architect Haas, formerly a collaborator with world-renown Swiss architects Herzog &de Meuron, and one of the lead architects of San Francisco’s MH deYoung Museum, has created an interactive built environment, partnering the dancers with transformable architectural surroundings crafted from inexpensive, ordinarily overlooked materials such as recycled cardboard and elastic chord, his sets strike an intriguing kinetic balance between linear and organic forms, and the extraordinary dancers of Alonzo King LINES Ballet grace the stage with incomparable physical artistry. 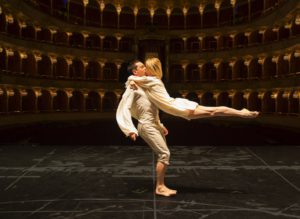