Here After is a cinematographic adaptation of the performance Puur, presented at the Festival of Avignon 2005 in the beautiful setting of the Quarry of Boulbon.

Flowing between fiction and dance, Here After mixes excerpts of the trashy but beautiful Super8mm short film that was part of the performance with 16mm images of the dance sequences. The performers dance to the cutting sounds by Italian composer Fausto Romitelli and the lyric music by David Eugene Edwards (Woven Hand), images that were filmed at a later stage in the natural settings of Oye-Plage and in the filmstudio.

Here After tells the story of an isolated community in which a power-mad tyrant commands an infanticide. In the danced scenes we see how the characters relive their memories in the hereafter; as if their emotions and traumas were captured in the memory of their bodies.

The film shows terror and its destroying effect on a community and questions existential themes such as life/death, culpability/penance, identity/memory, regret/negation and power/freedom. 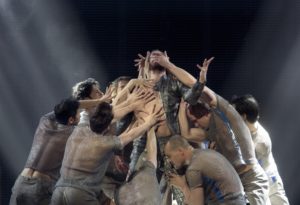 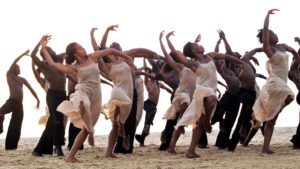