Spectacularly bold and ambitious, Grand Finale is at once comic, bleak and beautiful, evoking a world at odds with itself, full of anarchic energy and violent comedy. Filtering this irrepressible spirit, Shechter creates a vision of a world in freefall, featuring an exceptional ensemble of dancers and a live band of musicians. 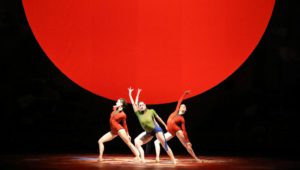