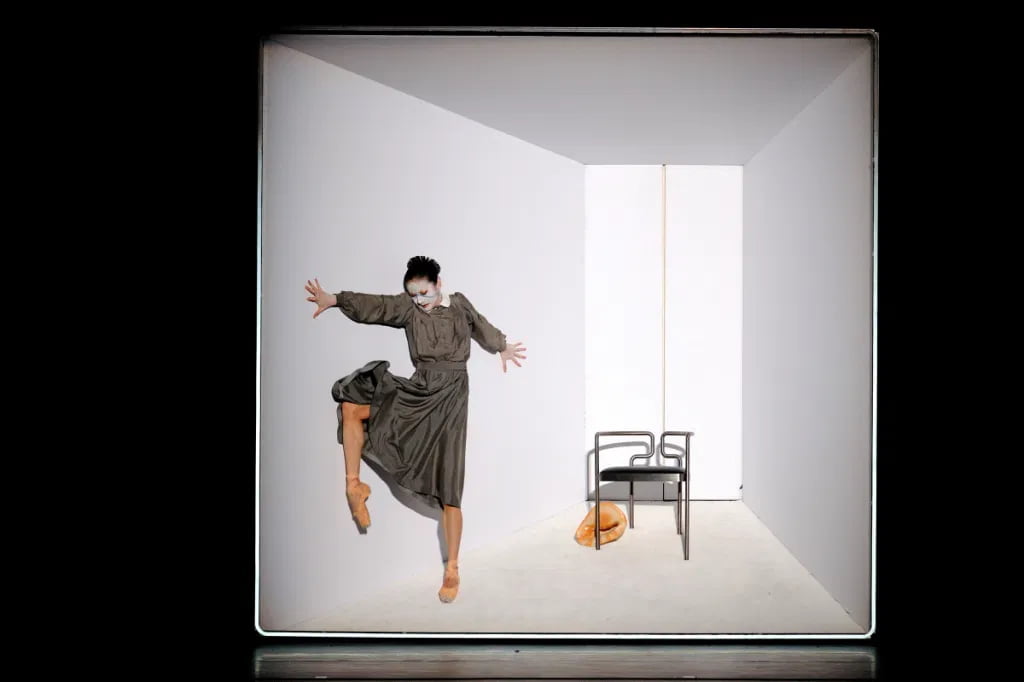 John Neumeier’s multi-cultural fantastical rendition of Han’s Christian Andersen’s The Little Mermaid has returned in a beautiful production at the San Francisco Ballet in the War Memorial Opera House. Created in 2005 for the Royal Danish Ballet and revised in Hamburg in 2007, Neumeier includes Andersen as the “Poet” guiding and lamenting alongside the Mermaid throughout the piece. Andersen is reported to have had loved a male friend and suffered emotionally when the friend entered into matrimony thus influencing his writing of his mermaid tale.

At the opening we see the deck of a ship with a giant blue optic cord spanning the stage mimicking the shape of waves below it. As the ship’s Captain, Edvard (Aaron Robison) and his guests celebrate his wedding day. The Poet (Ulrik Birkkjaer) dressed in a black top hat and a frock coat wipes away a tear as the music begins. The score by Lera Auerbach — the orchestra tightly conducted by Martin West — is a heavy one in the tradition of Russian classical music with hints of romanticism, occasional humor, and a lot of dissonance.

This Mermaid, danced with grace, athleticism, and emotion by Yuan Yuan Tan, falls in for the Prince (Robison) and trades her fins for feet with the help of the very forceful and passionate Sea Witch (a brutal Wei Wang). The casting for this inception coupled with the Balinese, Japanese and Noh-inspired dress and characterizations adds an east-west aspect, highlighting relations to the worlds below and above the sea.

The Mermaid is treated poorly on land and cast aside by the Prince who marries a Princess (Sasha De Sola) and she is driven to madness — at 42, Ms. Tan staggers us as she ferociously attacks her mad scene with a Black Swan-like intensity. Thereafter, the Poet arrives to pick up the pieces and — after shedding his hat and frock — dances bare-chested in a passionate and uplifting pas de deux with his Mermaid.

The production and its deep-blue ocean inspired lighting and costumes by Neumeier achieves a mysterious beauty throughout the 157 minute running time. The choreography, requiring strong athleticism by the entire company, is at times very modern and frantic — but it’s at its best when including the more lyrical movements of classical ballet. Unlike the fairy tale sweetheart of Disney fame, this Little Mermaid is instead an evolving, psychologically driven, graceful Lady of the Sea.