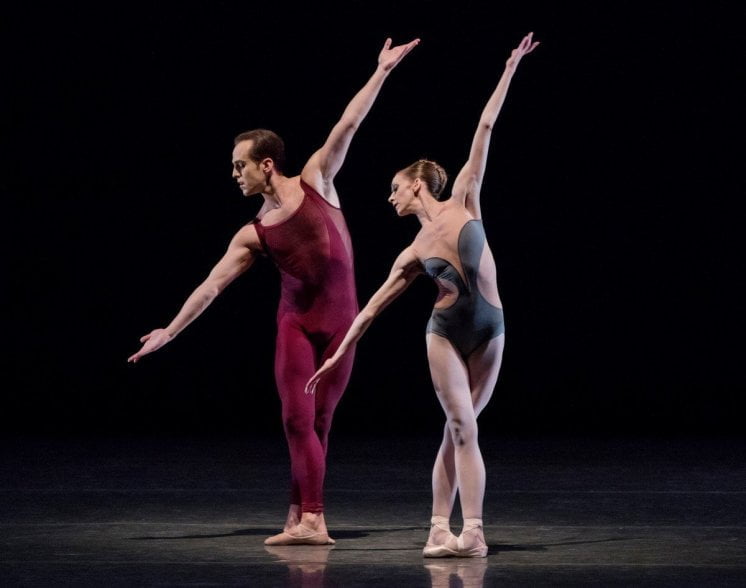 This contemplative pas de deux has a hushed, mystical quality as two dancers separate and return to one another with ever increasing intensity before disappearing into the darkness together.

Arvo Pärt, an Estonian composer born in 1935, has created several versions of Fratres, including this one, for violin, strings, and percussion. The title of the piece, which means “Brothers,” and the religious solemnity of the music bring to mind services in a medieval monastery. Choreographer Christopher Wheeldon has frequently been drawn to the music of contemporary composers. He used Pärt’s music for another piece, After the Rain, and created a trio of ballets set to music by György Ligeti, a Hungarian composer who died in 2006. Like these composers, Wheeldon uses a classical foundation to create works that are firmly modern in their feel and resonance.

This charming distillation of Rodgers and Hammerstein’s classic Carousel recalls the poignant romance and thrilling drama of the celebrated Broadway production.

In 2002, New York City Ballet devoted its opening night performance to the music of Richard Rodgers, to honor the composer’s centennial. For his contribution to the program, Christopher Wheeldon used an arrangement of Rodgers’ “The Carousel Waltz” and “If I Loved You” from the 1945 musical Carousel. The ballet is a distillation of Carousel’scentral romance, and it is evocative of the “dream ballets” found in many musicals of that era.