In 2016, choreographer Aszure Barton created Fantastic Beings as part of our She Said triple bill of works by female choreographers. The piece was reworked in 2018 and performed as part of our Voices of America programme at Sadler’s Wells, when this performance was filmed.

Choreographer Aszure Barton started learning tap at the age of three, trained in classical ballet at Canada’s National Ballet School, and has been creating dances for companies and artists around the world for over 25 years – including Alvin Ailey American Dance Theater and Mikhail Baryshnikov.

Barton describes her creative process as very collaborative – a conversation of movement between choreographer and dancers in which her “job is to listen and observe and pick up on people’s intuitive choices”.

This two-way exchange of energy is also how she views an audience’s relationship to a dance work: “I believe in the power of imagination so I won’t specifically tell an audience what to feel or what the work is supposed to evoke”.

As a result, there is no plot in Fantastic Beings: the audience is free to explore their own ideas and emotional responses to the piece.

“Strange amorphous hairy insect-inspired monsters”. Who could resist a costume design brief like this one?

Aszure Barton and Costume Designer Michelle Jank had been working together for nearly a decade when they teamed up again for Fantastic Beings in 2016. The costumes were designed to create a strong contrast: “hairy/insect/monsters” on the one hand and “streamlined animal/bird-inspired unitards” on the other.

Jank drew inspiration from the oily feathers of Australian black cockatoos for the unitards and actually used human hair wefts for the furry costumes. She also cited the score as a major inspiration, describing it as a “kind of sonorous fantasy land where the creatures come to life.” 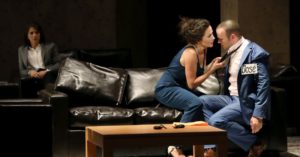 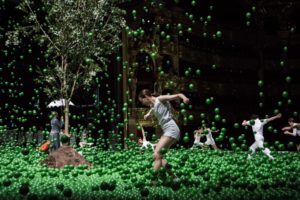